Some of the most useful resources you can use in your classroom are flash cards. Children find these engaging and enjoy the interactive learning experience. This helps them to grasp concepts quickly and look forward to educational activities. Furthermore, flash cards are suitable for children of all abilities, so this is an activity that needs little differentiation. Here are seven of the best flash card games for elementary students. 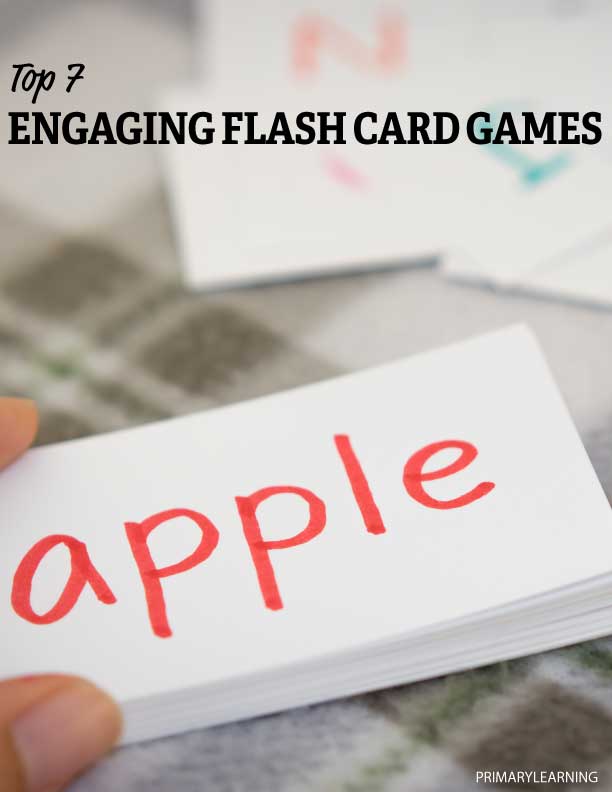 This is one of the most versatile flash card games as you can adapt it for all ages and abilities. You can also use it for most topics in the classroom.

To use this game for letter recognition, simply give children grids with different letters written into the squares. When you hold up a flash card showing a letter they have on their card, they circle it or put a cross on the letter.

Alternatively, you can have words written in the grids. When you hold up a picture flashcard, they must find the corresponding word.

You can adapt this flash card game for math by completing the grids with numbers. Hold up and read cards with a math problem and they cross off the answer on their card. So, if you hold up 12 ÷ 4, the children who have a number 3 on their cards will cross this off.

Musical Alphabet is a simple game to help younger children learn the alphabet and alphabetical order. If there are ten students in the group, then give them the first ten letters of the alphabet on flash cards.

If there are 20 students in the group, then give them the first 20 letters, and so on. Play some music while the children walk around the classroom. When the music stops, the children must arrange themselves in the order of the alphabet.

As the children become more confident, give them random letters. So, if there are 15 students, give them any 15 cards, not necessarily the first 15. When they arrange themselves in order, there are some letters of the alphabet missing but they can still arrange the letters in the correct order.

You will need cards with a range of words that fit into the categories of nouns, verbs, and adjectives. Put a piece of string or ribbon down the center of the classroom and ask students to stand in a line on the string.

Identify one side of the line as true and the other as false. Hold up a word card and say either noun, verb, or adjective.

This is a fun way to teach children the different types of words by using vocabulary flash card games.

You need two sets of cards for this game. One set of cards with simple math problems, such as addition, subtraction and multiplication. The second set of cards has answers to the problems.

You can vary the difficulty of the math problems in accordance with the age and ability of the class. Hand out the problem cards to the students with the problems face down.

Place the corresponding answers in the middle of the table face up. Each student takes it in turns to turn over one of their cards and find the solution to their problems as quickly as they can.

Or get creative with this set of math flash cards and develop your own game.

Another simple math flash card game is pairs. You need cards with addition, subtraction, multiplication, and division problems. All cards should have at least one other card with the same answer.

Another great multiplication card game will bring lots of fun for your students.

This game requires two or more sets of identical flashcards and students will play in pairs or small groups. Shuffle the two packs of cards and then deal the cards face down equally among the students.

Students take it in turns to turn over one of their cards and place it in the center of the table. When two identical cards are laid in succession, the students must try to slap their hand on the pile and shout snap first to claim the cards.

You can adapt this game according to the age and ability of the children by using different types of cards, such as pictures, letters, words, numbers of math problems, calendar flash cards, rhythm flash cards.

Fractions are a concept that many children find difficult to grasp, and math flashcard games are a fun way to help them develop a greater understanding.

For this game, you will need math flash cards that are specifically for use as a resource for teaching fractions. It is very similar to matching pairs. Turn the cards face down on the table. Each student takes it in turns to turn over two cards.

The aim is to identify cards that both symbolize the same fraction. For example, ½ is the same as a picture of a circle with one-half colored and is also the same as the words ‘one-half’.

If students find a pair, they keep the cards. If not, they must turn them back over and try to remember where each of the previously turned cards is located on the table.

Each of these flash card games will enhance the learning experience of your students. They are also easily adaptable to different topics and you can make your own flashcards to tailor the games to specific subjects.

Page load link
We use cookies to ensure that we give you the best experience on our website. If you continue to use this site we will assume that you are happy with it. Ok
Go to Top